From Kenya to Ethiopia, Sudan and Egypt:
The Pharaoh Expedition: From the Equator to the Mediterranean Sea

In search of new adventures, the first destination that came to mind was Africa - what could be more obvious than to travel to the "black" continent with its 54 countries, 1001 languages and cultures?
No other continent has appealed to explorers, adventure travellers and the rally scene as much as this continent! This is how the Trans Africa Expedition came into being, which has been divided into two halves for participants who cannot take six weeks off at a time.

Welcome to the second part of the Trans Africa Expedition, which will certainly be very demanding and indescribably eventful.
For many interested people the question often arises, what kind of men participate in such a motorbike expedition. The typical participants are before or in the middle of their "midlife crisis". Men who find the thought of three weeks of dirt and grime with a maximum of two T-shirts and only one pair of pants sexy. These are guys from D-Max, Camel Trophy and the like.
So the group of participants and the equipment are already clear ;-) 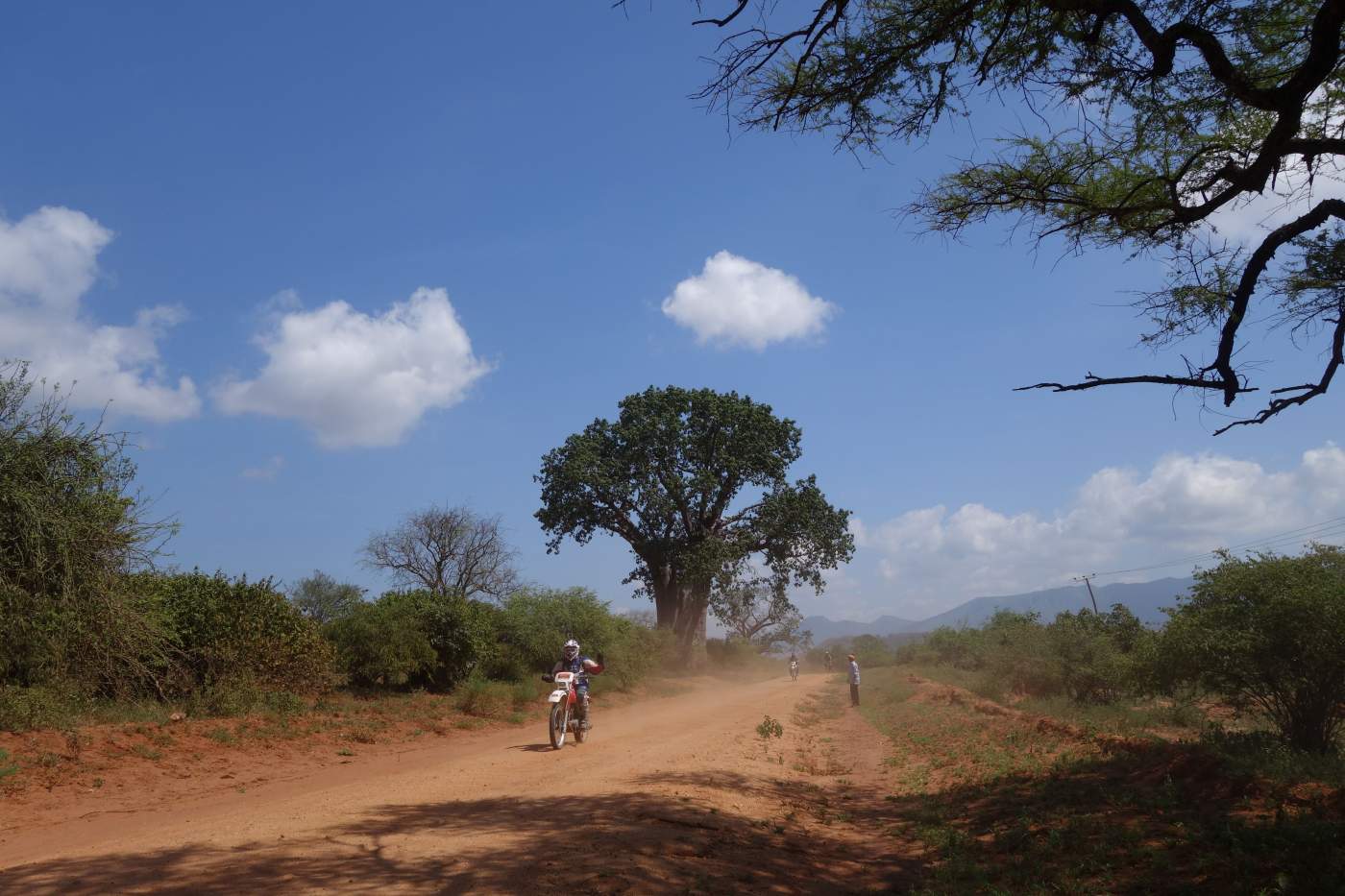 On dirt roads through Kenya

The Pharaohs Expedition starts in Nairobi:

You will land at Jomo Kenyatta International Airport in Nairobi, from where you will be taken directly to your accommodation and meet the rest of the group. We will spend the evening with a Kenyan "Tusker" beer and eat "Nyama Choma" (grilled meat). What we don't manage to eat, we take with us as a "doggy bag" to eat on the way. Towards evening we chain ourselves to the bar, we have enough time to sleep... when we get back home. Now we start our holiday! 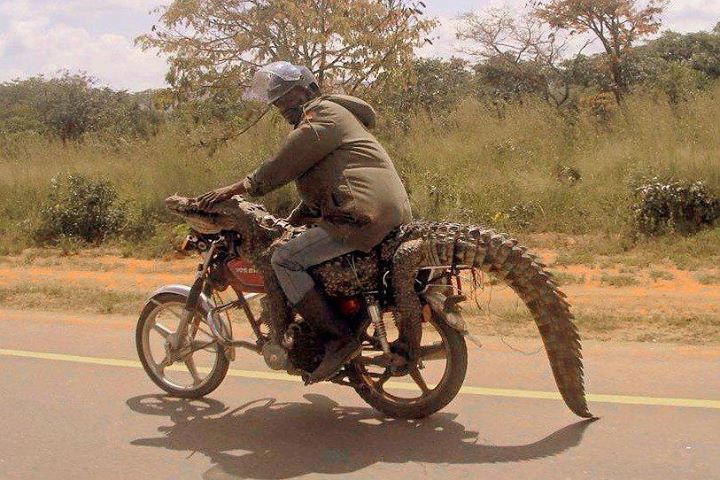 Crocodile for dinner in Kenya

Ethiopia lies ahead of us, like every morning we check the bikes, refuel and take in the provisions for a day. 1001 kilometres of pure enduro, 1001 kilometres across Kenya until the sun sets again and we set up camp.

The next morning we start our daily ritual: motorbike check, a glass of water and some dry bread for breakfast and off we go. Our companions are elephants, giraffes and the other maniacs in front of you on the touring enduro. We cover the last few kilometres to the border with Ethiopia. The largest landlocked country in the world (in terms of population) awaits us, ranking 173rd on the Human Development Index (out of a total of 187 countries).

The question arises whether it is necessary to travel to a country in which, according to WHO and UNICEF, not even every second Ethiopian has access to clean drinking water? - A clear "yes", because through individual tourism, as we are doing it (especially on this tour), foreign currency reaches the people who need it most directly. According to the World Bank, in 2000, 56% of the population still lived on less than $1.25. In the same year, the IDA (World Bank Fund for the Poorest) rated 60% of the roads as good or satisfactory. This data is certainly outdated; we will experience the current situation for ourselves as we cross Ethiopia. We should be prepared that we will not be able to travel very fast, as life here literally takes place on the road. There are people everywhere, animals running or children playing by or even on the road. This country, together with Sudan, will certainly be an indescribable experience on the motorbike expedition through Africa. 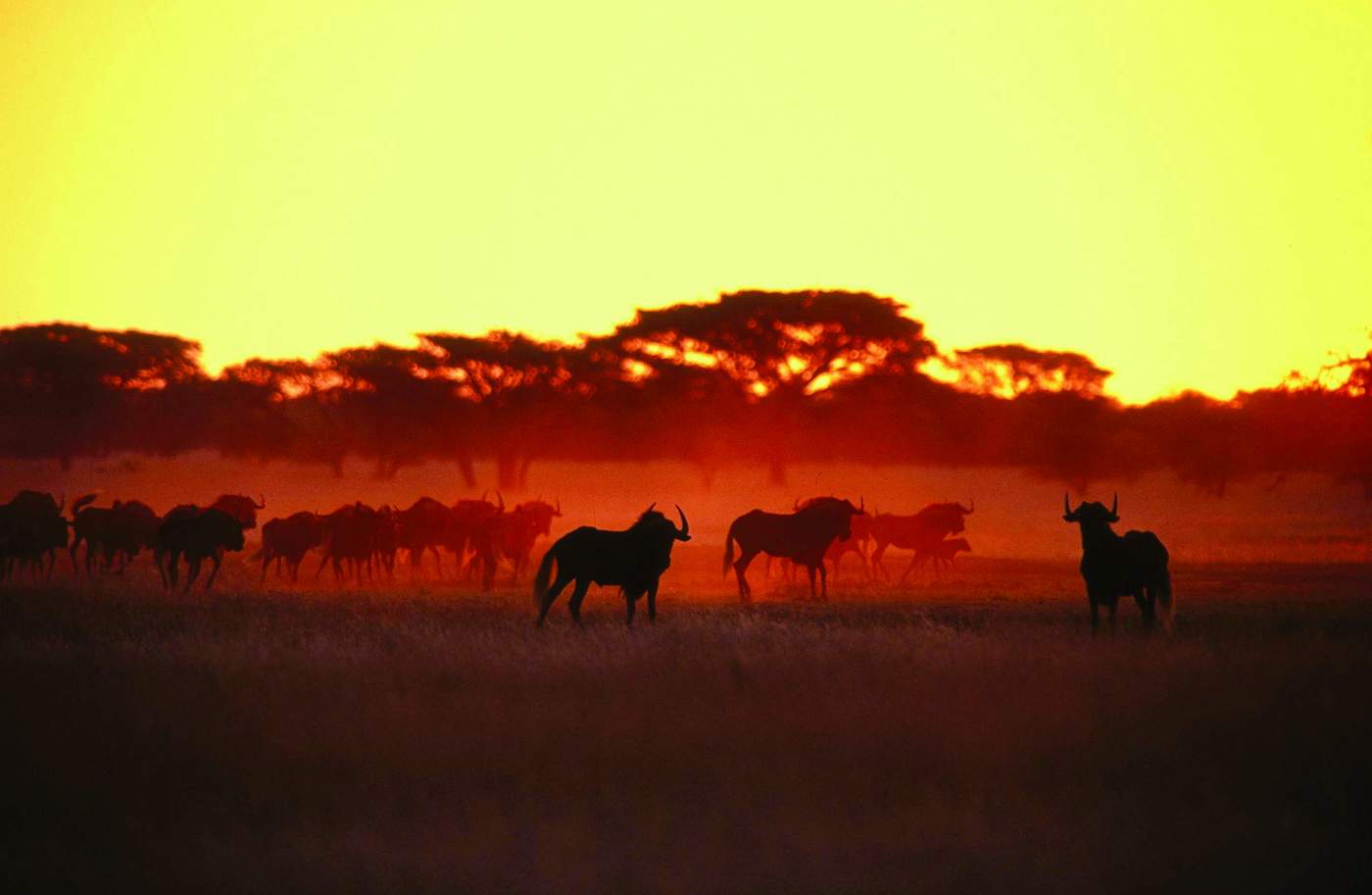 The turnpike to Ethiopia goes up, we fill up again and drive a few hundred kilometres on asphalt in the direction of Addis Ababa.

A short stop to refuel, eat and replenish water supplies and the motorbike tour continues towards the "cold" north with its merciless desert. A short but special shower stop in the African urban jungle of Addis Ababa. The nocturnal conferences of the city dogs over the rooftops of Addis echo through the city's courtyards and streets until sunrise. Anyone who has ever spent an African night on a rooftop or in a cheap hotel by the hour amidst cockroaches, fleas and the barking of dogs knows why we are treating ourselves to a four-star hotel for tonight. On the other hand, we are so brushed and ironed after the hellish ride that we would certainly sleep well in any doss house. 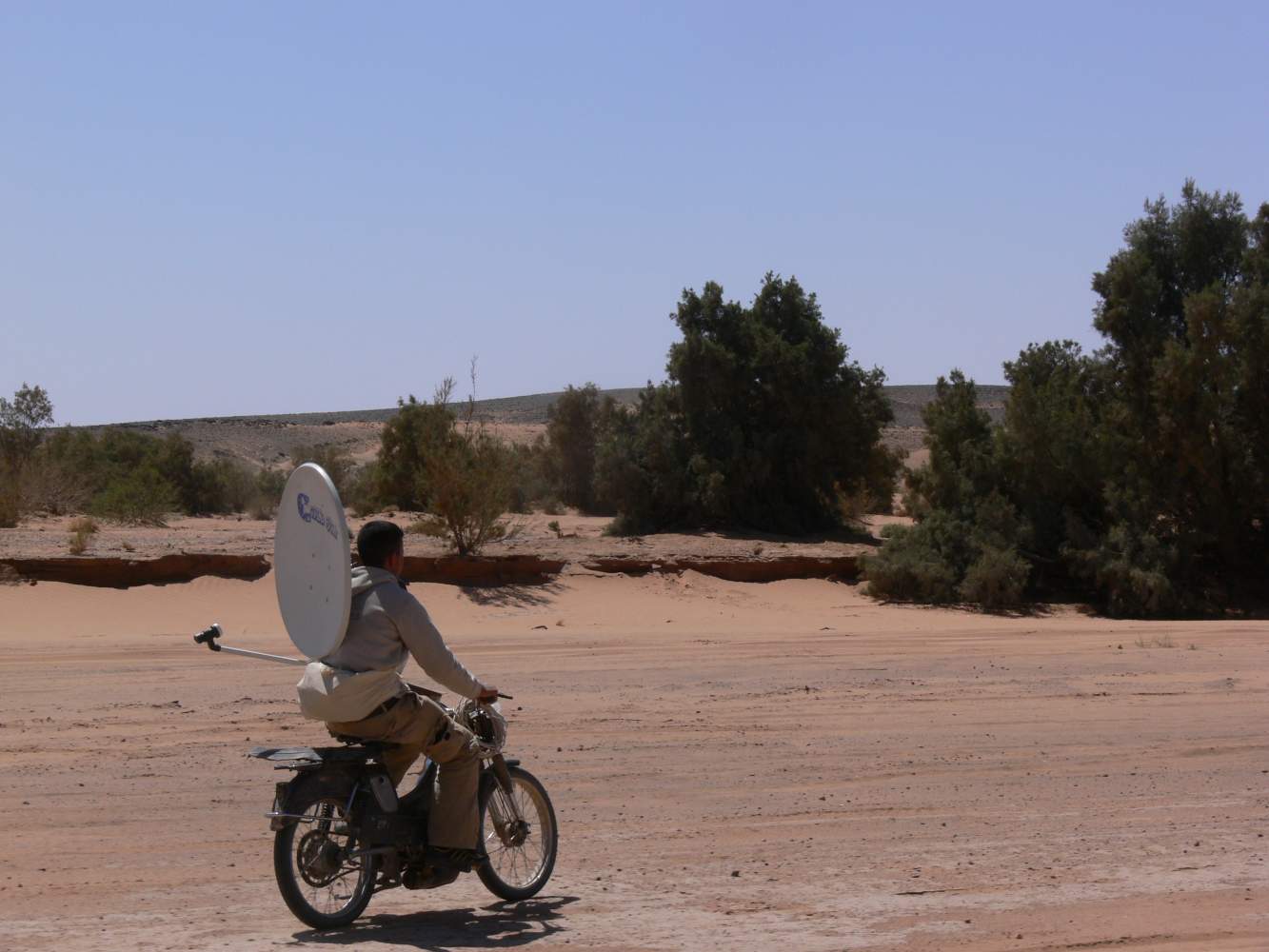 On the way to the source of the Blue Nile

We pass Merkato, one of the largest markets in Africa with about 100 hectares, which is visited by a quarter of a million people DAILY. Freshly supplied with water and bread, we set off on the Ethiopian roads. Our stage destinations are the UNESCO World Heritage Sites Lalibela with its famous rock churches and Gondar, the first capital of antiquity, where we end the evening at the Fasilides Fortress. The Feast of the Epiphany ("Three Holy Kings" according to the Gregorian calendar) with procession and celebration of the baptism of Jesus Christ, is certainly a highlight we will experience on the way.

About 2,000 years ago, about 400,000 San lived in Africa, of which about 100,000 still live in southern Africa. In 1652, the Dutch started the extermination of the Pygmies in the Cape region from where we started. Today we have arrived about 10,0000 kilometres further on at the northern end of their hunting ground. Certainly, a San did not roam the whole of Africa to hunt, yet a San hunter covered 4,000 kilometres per year! 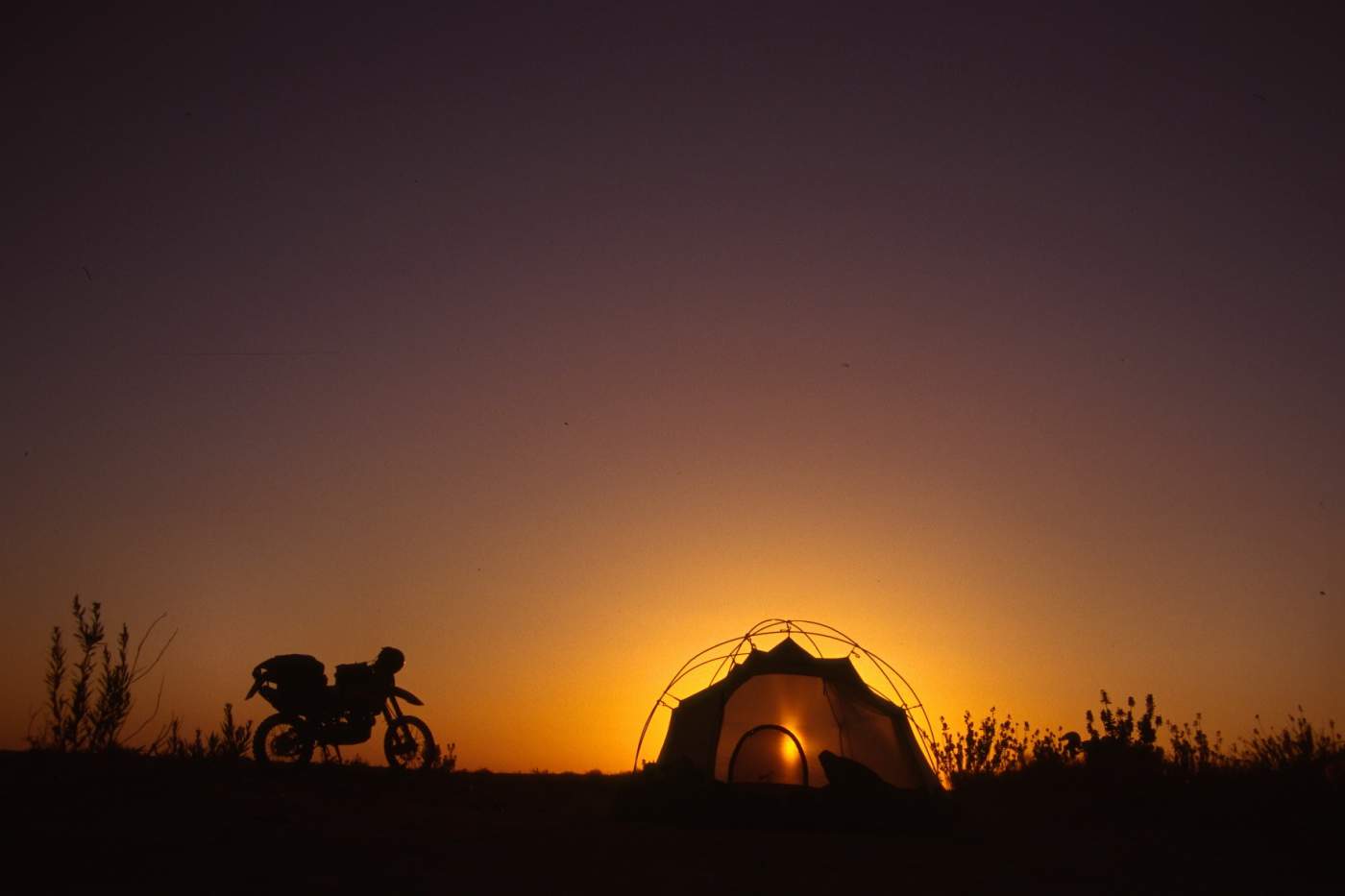 From the bush to the desert, from Ethiopia to Sudan:

Today's driving day will be rather long and monotonous from the Sudanese border to Khartoum. We will cross the south mainly on asphalt to the capital of Sudan, where we will arrive shortly before sunset.
Along the "Sudan Express" we will cross the Nubian Desert, also known to the Copts as Taseti (sandy arc land), for about 1000 kilometres through the former Kingdom of Nobatia, the desert area between the Third Nile Cataract and Khartoum, considered to be ancient Egypt's high culture. In the desert land of the tall Hamitic Nubians, we will encounter cultural-historical relics of the ancient pyramids, burial cities and temple ruins, which arose before our era from the cultural flowering of the Kingdom of Kush. We will spend the night in or near the oldest necropolis of the kingdom of Kush. Fill up the water and petrol tanks for the last time in Sudan: Fully refuelled, we will return to the merciless desert that will surely demand our last strength before we cross the border at railway station 1 to the Kingdom of the Pharaohs. 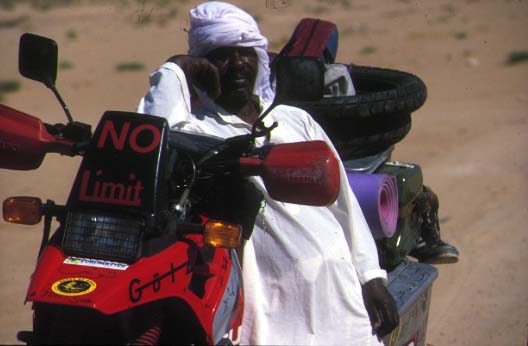 Ship ahoy: The Africa Motorcycle Expedition reaches the last country of the Africa crossing with the border crossing from Sudan to Egypt:

In shā'a llāh, the ferry will already be waiting for us in the morning hours. After the "customs clearance" of the motorbikes in Wadi Halfa, we can carry the bikes on board and enjoy an (old school) crossing on the pontoon or barge (depending on which one is ready for use). The border situation between Egypt and Sudan is getting on the last nerve of every tour operator! Maybe that is the reason why no one offers the crossing? We leave Lake Nubia and cross the border into Egypt to Lake Nassar. Ahead of us is the harbour town of Abu Simbel and a marathon with the authorities to register and re-insure the motorbikes in Egypt. With our new Egyptian number plates we can then drive into Abu Simbel for the long-awaited shower.. 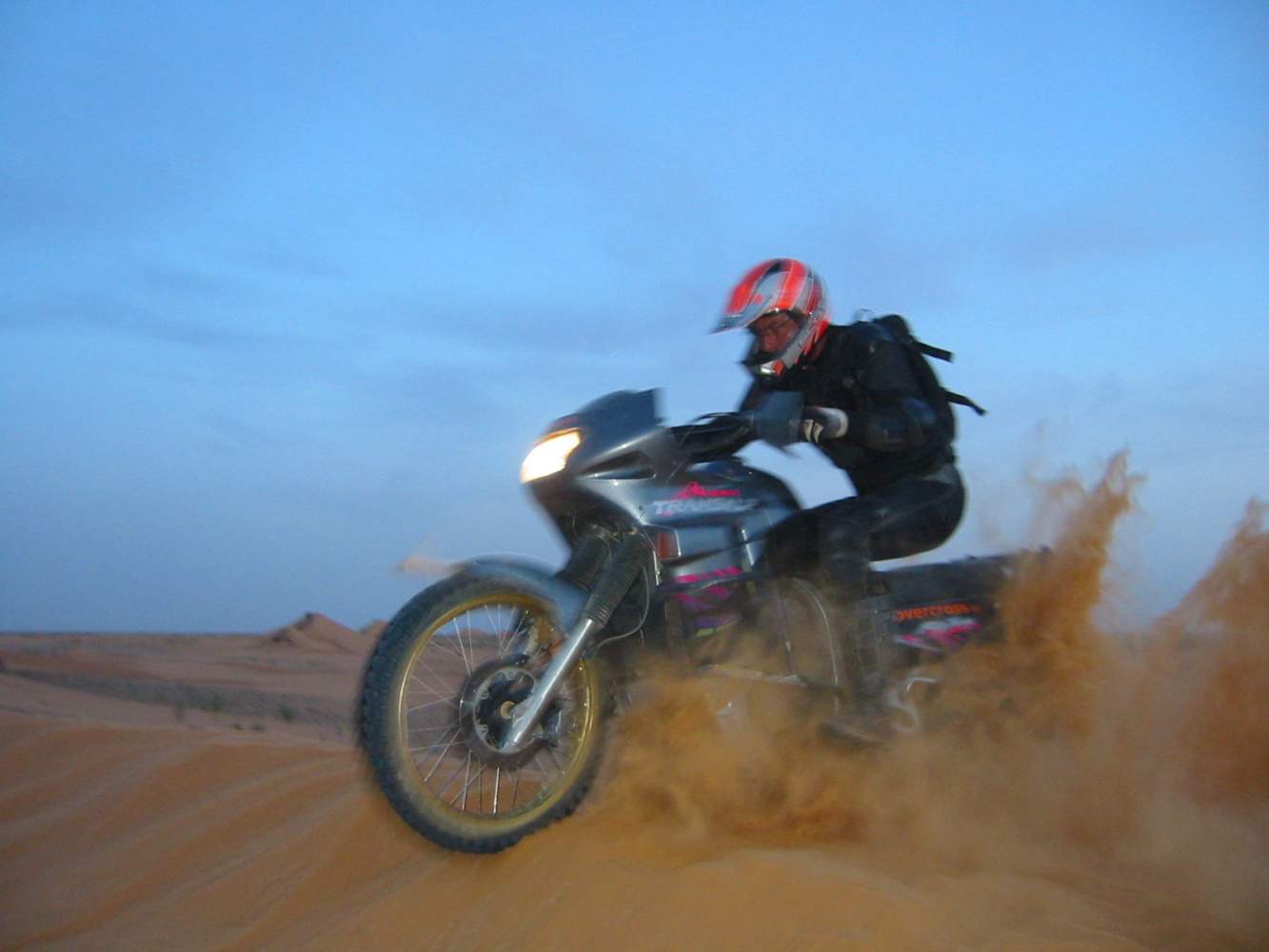 In the footsteps of the pharaohs to the Valley of the Kings:

We leave Abu Simbel on a tarred road heading north along the Sahara. The desert world with its isolated volcanic craters alternates with the monotonous mirages of the Sahara and the boredom of the tarred road that stretches beyond the horizon. After 250 kilometres the checkpoint of Aswan is reached and after a few bends the dam of Aswan is finally reached. On the Khazan Aswan Road we cross the Nile and follow it northwards to the Valley of the Kings on Egypt's lifeline. Luxor, the largest city in Upper Egypt, will be our last supply base. From Luxor it is only a "stone's throw" through the land of the Pharaohs. We will spend the night near the Karnak Temple and decide the following day whether to take the boat on the Nile or cross the country as planned by Enduro.

We leave the green Nile belt and enter the Egyptian desert/Sahara in the early morning hours. We cross the desert tongue of Quena with the Enduros, if the road conditions and our condition allow it. Along the Nile we travel on to our big stage destination: Cairo. The streets become busier and you can literally feel the metropolis announcing itself with the crowds of people on the streets. To the west of the Nile, we can see the Pyramids of Giza from afar. A great goal has been reached, we are standing in front of the Sphinx and the pyramids, the stage destination Egypt has been reached and we are almost at the Mediterranean Sea - time for a good, cold beer.

On the Road to the Destination: Alexandria

We can take a relaxed approach to the last few kilometres through Egypt. The route from Cairo to Alexandria is well-maintained asphalt roads. Time to relax and review the journey once more: We are welcomed in Alexandria and have dinner before we take the motorbikes to the nerve-racking Egyptian customs the next day, where the container is already waiting for us. From this city steeped in history, where the famous library and one of the seven wonders of the world, the "Pharos of Alexandria" lighthouse, stood, we take the train back to Cairo.

Fly and ride with your own bike.

Motorcycle Expedition with rental bike: "All in" (incl. Upgrade 1)

$131 Upgrade NO 3: In the support 4x4 vehicle per participant