As already described in the foreword, this motorbike trip is not for muzzlers, but rather an exclusive experience for a handful of "motorbike adventurers" who will have the chance to take part in the Pharaoh Expedition "Gooo South!" in 2023!
Countries like Egypt, Sudan, Ethiopia and Kenya will really be crossed in the most adventurous way in about three weeks and those who still have time and adrenaline addiction can "pull" the next adventure line Equator Gooo SOUTH!

START is the land of the Pharaohs along the Nile and the cult cities of Upper Egypt, across the Nubian Sahara via the fork of the Blue and White Nile in Sudan we experience the pacified Southern Ethiopia and cross the land of the Mursis (Plate Lips Ethnic Group) and the Oromos. The last stage leads through the rarely travelled Sibiloi National Park along Lake Tucana, past Kenya's highest mountain, the motorbike expedition reaches the equator line to the destination in Nairobi.

It's TIME, TIME to experience the adventure!

On the Road in Egypt:

Egypt Cairo:
The participant chaotic capital of the pharaohs, Cairo!
The OVERCROSS tour guide "smuggles" the motorbike group from Maṭār al-Qāhira ad-duwalī International Airport through the metropolis of millions to the Government al-Quahida customs. Customs papers and stamps fly through the air and end up in our bags after much back and forth with the passports of the expedition participants. With the driving permits we leave the "official stage" and squeeze through the big city of Cairo like mustard from a tube with yours we take the shuttle to the kilometre 15555 inhabitants PER QUADRAT KILOMETER!!!
After the big city hell ride we arrive about four hours later in Alexandria, only 220 kilometres away, where Mohamed Ali Nassar is already waiting for us to take the YAMAHA Tenere fleet out of customs.

Alexandria, the gateway to the Mediterranean, over which the sun rises on the eastern headland. After a feudal breakfast in the colonial dining room, we step outside the hotel where the fleet is lined up at dawn!
We start the engines, leaving the sea and Alexandria in the rear view mirror and eat the asphalt kilometres like fast food in the odometer! The throttle is on the right, the head behind the windshield in cover and the stench of Cairo wafts over the Kinghighway TO CAIRO:
The last required stamp is hammered into the passport and the customs procedure for the enduros is celebrated in slow motion, Egyptian tea ceremony style! Dusk is approaching and we squeeze through the dark, completely filthy and congested streets of Cairo southwards to the pyramids of Giza. Upper Egypt. 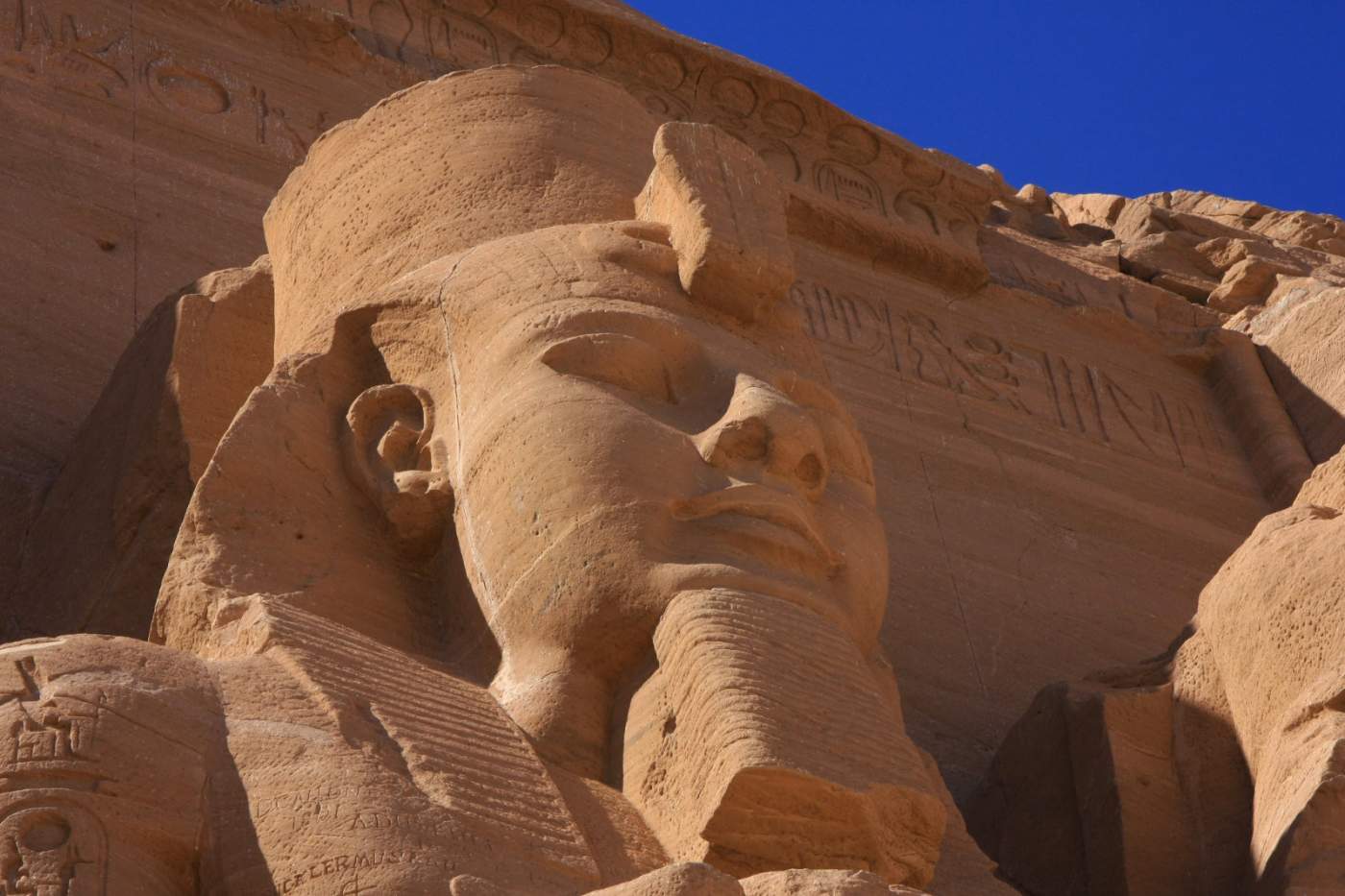 Journey along the Nile

A last glance in the rear-view mirror at the Sphinx of Giza, gently enveloped in the smog.
Behind us lies the Cheops Pyramid, in front of us the "lifeline" Nile which we follow southwards to the desert tongue of Quena, hour after hour, day after day, it gets warmer and sandier along the Sahara.

In the footsteps of the pharaohs

Along the Sahra River, the Enduro troop travels through Upper Egypt to the royal city of Luxor, which is the last airlift supply base in Egypt for the Enduro Expeditions group.
On the eastern bank of the Nile we spend the night in a Nubian village not far from the Valley of the Kings. After nightfall, we take the boat across to Karnak Temple in Luxor.
Same procedure every day:
The sun rises, we start the engines start the 700 Tenere Rally, cold and sober we set off into a new day, a new adventure.
A cup of tea, a quick grin for a "selfie" at the foot of the statue of Ramses II, which Unesco saved from "drowning" in Lake Nassrsee in a spectacular relocation. Via the Khazan Aswan Road we cross the mega-structure from the sixties, which was built in 11 years, in 11 minutes.
We reach the bank of the Nile and cross the Nile eastwards to Haifa to the Egyptian-Sudanese border. 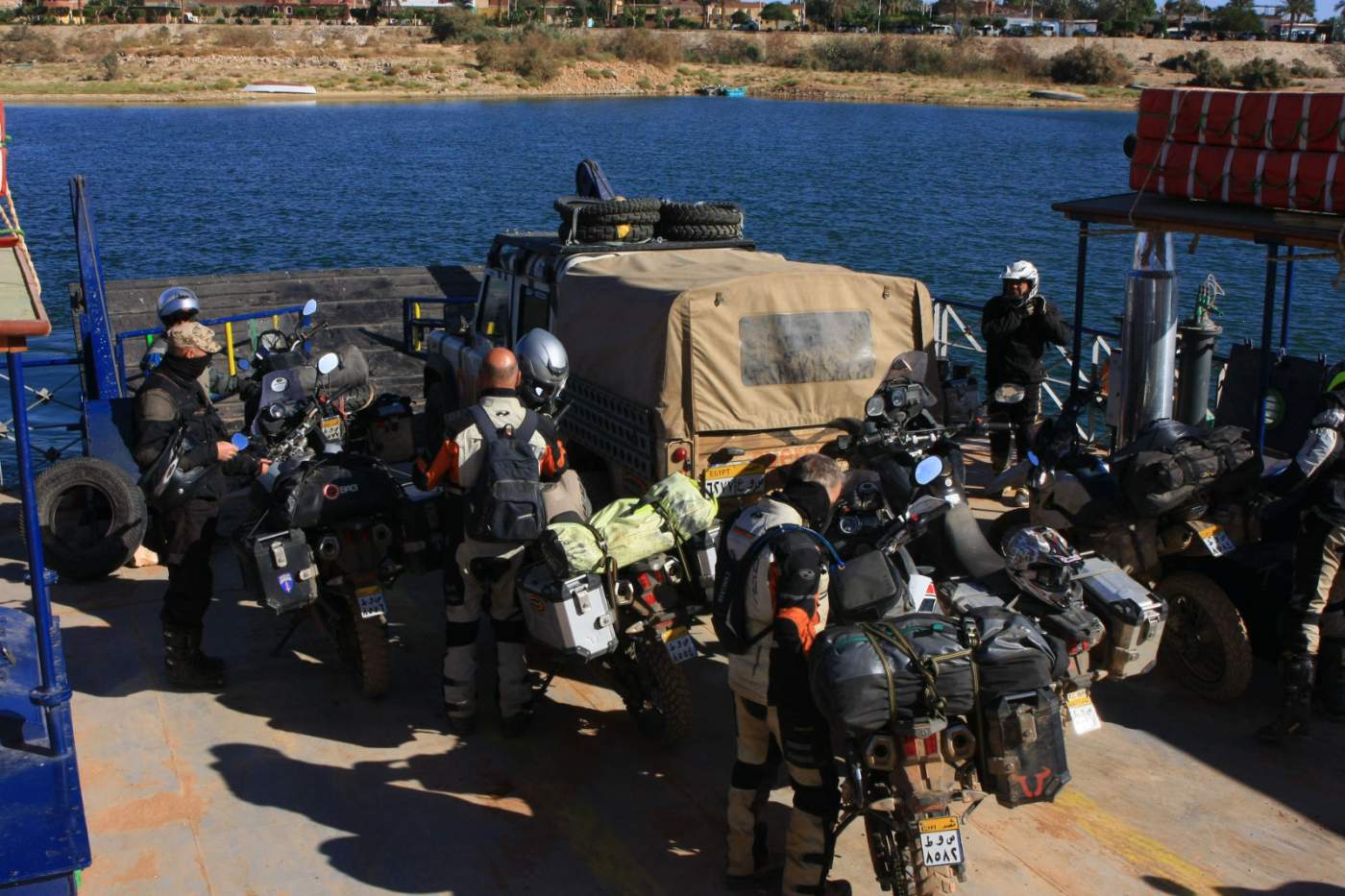 Across the Nile to the border with Sudan

Crossing the border from Egypt to Sudan

Our long-time colleague Kemal Abdul Aziss is already waiting for us at the turnpike, Jojo (our online tour guide) has already announced us 30 minutes before arrival.
As always, he is amazed at the German punctuality and collects the passports with his brother-in-law, who fortunately "runs" the border and stamps our papers.
You can plan between eight and forty-eight hours for the border formalities in Cairo, Alexandria and here at the Aswan Dam. On our first trip about ten years ago it took me two days, on the second expedition only one day and tomorrow,,,,, in Shala only three hours.
The border situation between Egypt and Sudan is simply zää, the Egyptian IBM computers and users stand for I-nshalla B-uckra -M-alesh.
That means as much as, God willing today or not, but at some point the barrier will also go up for us into Sudan..... Inshalla.

Through the Nubian Desert

In the meantime, we Endurists are riding like a "motorbike snake" towards the sun, at some point we turn right on the tracks of the "Sudan Express" train line across the Nubian desert.
The Nubian Sahara section was also called "Taseti" (sandy arc land) by the Copts, this arc land stretches like a half moon along to the south, this Sahara section is one of the most spectacular desert sections of the Nubian Desert!
Hundreds of kilometres through the Kingdom of Nobatia lie behind us, before us the desert area between the Third Nile Cataract and Khartoum which is considered the high culture of ancient Egypt.
In the desert land of the Hamitic Nubians, we experience the cultural-historical relics of the pyramids of Merore, as well as burial cities and temple ruins, which are said to have arisen from the cultural flowering of the Kingdom of Kush before our era.
After days in "nothingness", civilisation has us back, Karthum refuelling, eating internet and..... is all overrated, we give it gas and turn left at the junction of the Blue and White Nile, into the most densely populated landlocked country in Africa, Ethiopia. 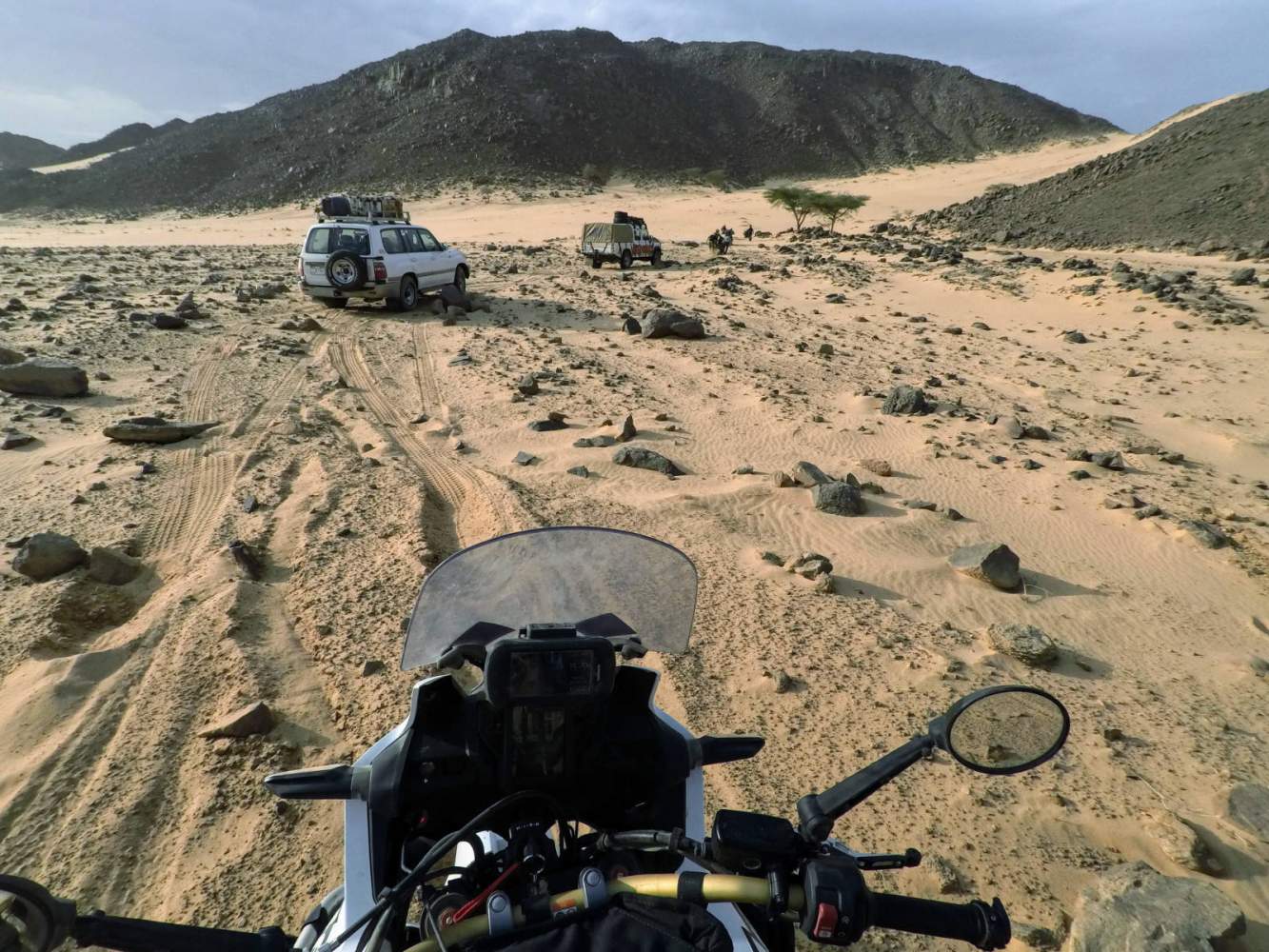 By motorbike through the Nubian Desert

Ethiopia is legendary, we will not be able to visit cultural cities like Lalibela and Gondar in the north for the time being, but we will experience the legendary south of the country all the more.
Ethiopia is one of the poorest countries in the world. Due to deforestation and the fall in coffee prices as well as the worshipping war in the Tigrai region, the country has degraded itself to beyond the point of starvation. Is it ethical to travel to a starving country where not even every second Ethiopian has access to clean drinking water?
A clear YES, because individual tourism brings 100% cash in the most direct way to a country, to a population that lives on less than $1.25 a day!
On wild dirt roads typical for Africa, we cross the country's borders "semi-legally" to the area of the Oromos, which are widely known as the Plate Lips.
We cross the region of the Southwest Ethiopian peoples and the area of origin of the Oromo in the highlands until we meet the East Cushitic-speaking groups such as the Afra people, Saho people and Somali people in the lowlands. An exact location here in the rather "nomadic south" is and remains disputed, however, as is the indefinable course of the border where we meet Malcome from Addis Adeba somewhere 200 kilometres east of Omorate.
Malcome had done the first Ethiopia scout tour with me in 2012 and specialises as a top birder, due to old friendship he receives us (if necessary) at a military post where he has arranged our coming with his brother-in-law and the crossing of the "green border".
The next days we follow the tracks of the nomads through the "no man's land" until we reach Lake Turkana and are thus in Kenya!

On the wrong track between South Sudan, Ethiopia and Kenya

We leave the Oromo Valley and Mago National Park behind us, and cross a nomadic region along Lake Turcana across the Sibiloi National Park with a military convoy which we have to use as a "toll" for this route.
Time for an ice-cold beer in Nanyuki, we have reached the equator, from today on we take the southern hemisphere past Mount Kenya "under the rubbed studs" to our destination Nai-robbery.

This exclusive motorbike tour is not so exclusive because it is "expensive" but because it is unique!
OVERCROSS has been the only motorbike tour operator in the world to offer this adventure trip for years.
With more than 100,000 kilometres of experience in Africa, I can say with a clear conscience that this Africa crossing, or rather the crossing from North Africa to the equator line in Kenya, is the most exciting and unique enduro trip ever!

"This "voyage of discovery" will be carried out as an EXPEDITION with the clearly formulated imponderables and challenges of the various climates, borders, regulations and conflicts of the people!
A fair amount of travel & enduro experience as well as mental stability are required to participate in this Pharaoh as well as the Equator Expedition and especially the Trans Africa Expedition.
"It is and remains for me the greatest adventure and the most eventful tour I have experienced in my life."
Joe Küster tour guide and jack-of-all-trades

Basic package of the motorbike tour through Africa:

Motorbike expedition with a rental bike: "All in"

Passenger in the expedition/escort vehicle: